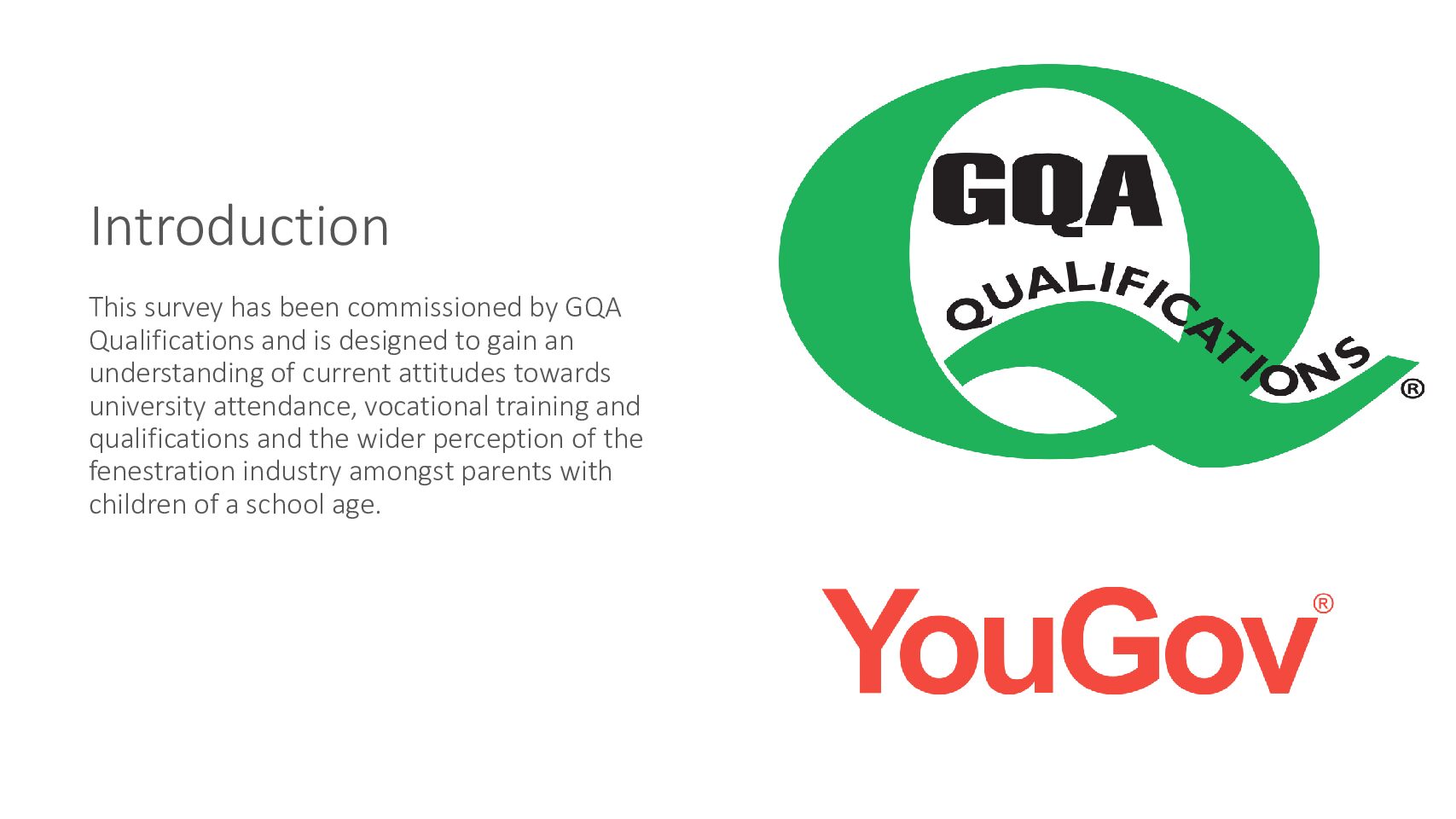 A YouGov survey* commissioned by GQA Qualifications has brought to light fresh insights about the attitude of parents to vocational training and careers as an alternative to their children going to university.

The survey took note of the views of over 1,000 parents asking them to give their opinions on the routes available to their children after completing their initial education. Did parents think that their children should go to university as so many have done in the past, or did they think a vocational career path was a better option? The survey spoke particularly about the Fenestration Industry, offering parents a brief overview of what the sector was, and what it delivered to the economy in the UK.

“The Fenestration Industry was described as that which is concerned with the placement of windows, doors and glazing into buildings; is an industry instrumental to the construction of the glass sky scrapers which adorn every major city skyline in the UK; an industry that is worth over £4.6 billion per year, and has over 25 recognised career paths, all with training and qualifications available to those who choose to make their career in it”.

While only 8% of the respondents claimed to have any awareness of the extensive number of career paths in the Fenestration Industry that are open to their children, encouragingly over 75% of them were not averse to their children choosing the industry as a potential career.

Almost 60% of them agreed that for decades we have been sending too many young people onto university courses that do nothing to improve their life chances or help with their career goals, and with the skills gap and general need for staff across all industries at an all-time high, it’s encouraging that parents are now moving away from what had become a seemingly automatic process that sent their children onto higher education. Additionally, the survey revealed that just under 70% of those parents said they were not averse to their children entering the Fenestration Industry instead of going to university, and almost half revealed that they would actively like their child to explore vocational career opportunities first to give them a balanced view of the options available to them as part of the decision-making process.

Commenting on the survey, Mick Clayton, CEO of GQA Qualifications who commissioned the survey said:

“While it’s great that such a high proportion of parents are not averse to their children entering the Fenestration Industry, it’s clear that we still have a lot of work to do to raise awareness of the sheer variety of roles it offers. With over twenty-five career paths available, all with the opportunity for ongoing training and formal qualifications, it is a great industry for anyone to consider as a home for their skills and career ambitions. Continuing personal and professional development are at the heart of what we promote at GQA, and we will continue to collaborate with industry employers, professional bodies and campaigning organisations to raise awareness of the industry and what it offers.”

“There is without doubt encouragement that parents are recognising the industry as a suitable place for their children to forge their careers and we will continue to work to raise awareness of the opportunities that are available”.

The full survey is available for download on www.gqaqualifications.com and for more information about the industry please also visit www.buildingourskills.co.uk

All figures, unless otherwise stated, are from YouGov Plc. Total sample size was 4506 adults. Fieldwork was undertaken between 15th – 19th July 2021. The survey was carried out online. The figures have been weighted and are representative of all UK parents.